So what is "Beyond the 'decisive moment'"? 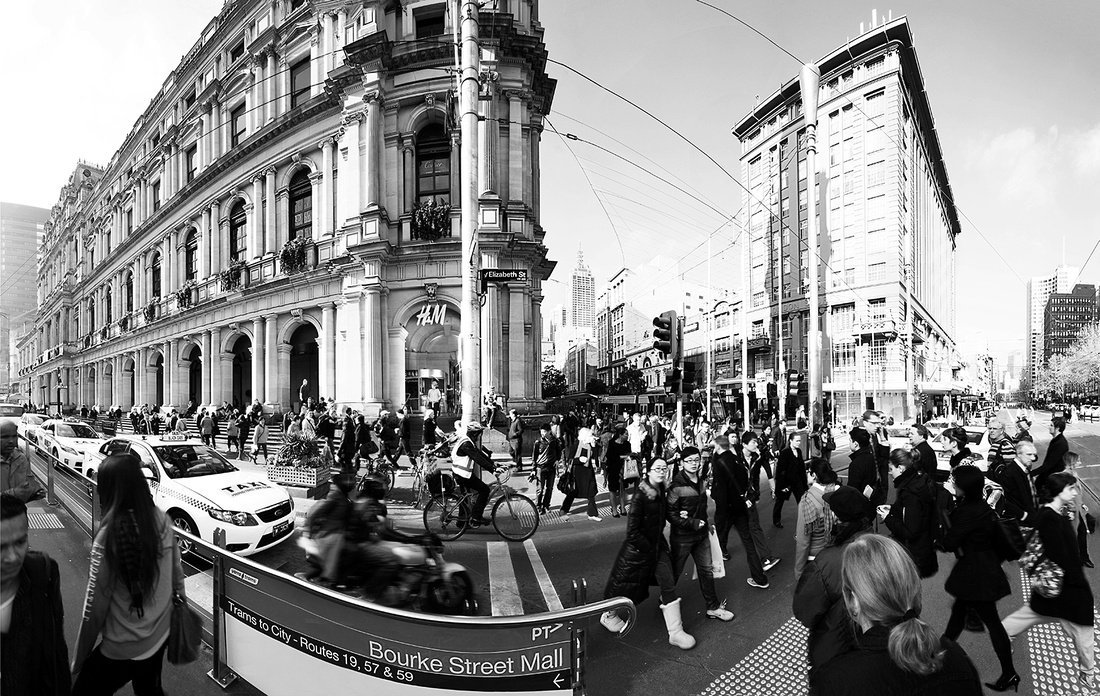 Intersect I: Bourke and Elizabeth StreetsBy David B Simmonds (2015), from the series [email protected] This work was a semifinalist in the Moran Contemporary Photographic Prize 2015.

Going beyond the single ‘decisive moment’ (Henri Cartier-Bresson) has been at the core of how I photograph the world for many years now. For me, seeing and experiencing any place needs more than just one frame, more than one moment. After all, I exist in any place for more that one moment and my memory of that place consists of many moments woven together in my mind’s eye.

Film and the moving image would be a logical solution but, like in a Pieter Breugel or David Hockney painting, I am still wanting to express myself in a single ‘frame’ which is teeming with life. Not a fantasy of life, but like my memory of that life, which expands any single moment of time into a collective of multiple decisive moments, expanding time in a single place and rendering it into one seamless image. As if it were a single decisive moment.

Looking back, I can see how this artistic practise evolved over the years from literally cutting and pasting together actual prints into a larger montage (homage to David Hockney’s ‘joiners’), through creatively responding to adversity when something goes wrong on a commercial shoot, and I still needed to deliver to my client (like the wind blowing fireworks away in a completely different direction and out of camera frame; second camera to the rescue shooting fireworks components which were then recomposed into the main image, all on film in those pre-photoshop days!)

The digital era has allowed me to take this approach into more complex and fluid ways of working. Building up and choreographing a story of community and place, rendered into one image as if it all really took place in that one moment. At times I play with that even more, also distorting perspective to give my image a dynamic and emotional push that enhances the drama of my visual story.

I’ve been making many of these images, creating a body of work that tells a story of contemporary life in our cities and urban spaces. I’ve called this series [email protected] (648,000 being the number of 1/60th second moments in a 3 hour time period). This featured image Intersect #1 invites us into the diversity and vibrancy that is one of Melbourne’s busiest intersections, Bourke and Elizabeth Streets. There are many cameo roles: The Big Issue seller sitting on the plinth above the street, the elderly woman with the handkerchief etc. Over 3 hours I took many photographs from the same position, from which I selected and choreographed my ‘characters’ in this ‘play’, creating an extended narrative in a single frame.

Limited by the environment I could not get back further from my subject, so I used a wide 17mm TS lens, distorting the buildings, giving them a dynamic flow as they bend around the intersection, evoking the famous Flatiron Building in New York. Using a high contrast black and white treatment adds to the grittiness of the inner-city vibe.

David Hockney has said that “All photographs share the same flaw. Lack of time.” What I’m attempting to do is expand time and bring it back into the single frame yet maintain a sense of the authentic moment that is the defining quality of all good street photography.